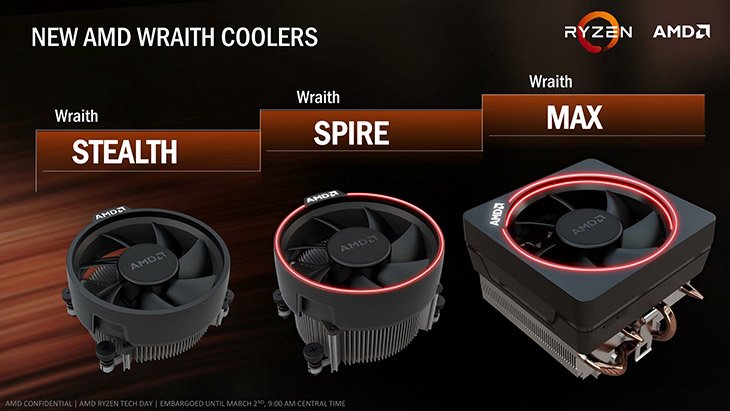 Before we move on, I want to mention that we have covered AMD's Ryzen 3, 5 and 7 processors in our reviews listed below:

All the new Wraith coolers are designed for near-silent operations and are capable of even handling overclocking. The new Wraith Coolers with the exception of the Wraith Stealth feature color-configurable LED illumination so you can tweak the LED of your cooler to match your overall build color scheme. Head over here if you want to download the RGB illumination control utility that's powered by Cooler Master. AMD has stated that the new coolers utilize a new spring-screw clamping mechanism which is supposed to make the installation process much easier.

I have to give major respect to AMD for going the extra mile in shipping their Ryzen processors with high quality stock coolers that are built like third party coolers with a copper base and heatpipes. Intel has always bundled their processors with garbage coolers that most people simply throw away because they are extremely loud and do a terrible job of cooling. Our original Wraith cooler review showed us how serious AMD is in bundling their processors with high quality stock coolers. For this review, AMD has sent us the Wraith Max RGB and Wraith Spire (No LED) which we will put the test to see the cooling and noise performance that they offer. 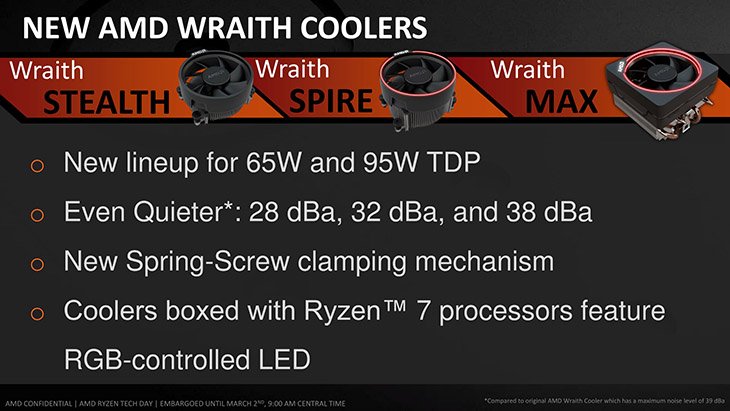 I have been seeing many people on different forums asking where they can purchase the new Wraith coolers, specifically the Wraith Max. Unfortunately, AMD does not sell the new Wraith coolers separately so you will have to purchase a Ryzen processor that comes with the Wraith cooler you want. If you think about it, it makes sense why AMD is not selling the Wraith coolers separately because they do not want to compete with their manufacturing partners in the CPU cooling market. AMD is a company that focuses on selling processors, not accessories. It would not be worth it for them to compete in the CPU cooling market with all the third party manufactures.

Since these coolers are designed for the AM4 platform, let's talk a little bit about AMD's AM4 socket. The AM4 is a PGA (Pin Grid Array) socket and it comes with about 40%+ more pins than AM3+. AM4 supports 1331 pins which is a big increase over the 942 pins of the AM3+ socket. Unfortunately, the new mounting holes break compatibility with all previous generation coolers for AM2/AM2+/AM3 and AM3+. Thankfully, most, if not all, CPU cooler manufactures will send you a free AM4 upgrade kit which will allow you to use your existing cooler on AM4 motherboards.

You can use the RGB LED header cable if your motherboard doesn't have an RGB LED header. After that, you should be all set to install your RGB lighting utility and start customizing the lighting of your cooler.

The installation process is fairly simple and straight forward. On the left, you have the installation process for the Wraith Max and on the right it's for the Wraith Spire. I got these images from the ASRock X370 Taichi motherboard manual because it does a good job of showing how to install each cooler. For the Wraith Spire, you can connect the RGB LED cable to the AMD FAN LED1. For the Wraith Max, there are two options to get the LED ring. First option is you can connect it to the AMD FAN LED1 header on the motherboard, or the second option is you can use a different cable to connect it to the USB_5 header. With the first option, you can sync the light effects with the other RGB LED regions of the motherboard.

These two coolers will be tested against the Hyper 212 EVO. At $25, the Hyper 212 EVO is a popular cooler among users who are on a budget and it will be interesting to see how it competes with the Wraith Max. All of the testing is done with an ambient temperature of ~22C. RealTemp will be used to monitor the temperature of the CPU. We will be measuring the temperatures during 3DMark FireStrike on max settings. After each testing, we let the temperature to stabilize for 10 minutes to ensure that the temperature is back to normal. We made sure there were as few processes running as possible by disabling a bunch of unnecessary services that come with Windows 10.

Idle temperatures will be measured after leaving the computer idle for 20 minutes. CPU-Z will be used to verify the CPU speed and the voltage being used in Windows 10. Also, the coolers are tested with the default settings (Turbo, C1E etc) enabled in the BIOS.

We will measure the noise levels for both idle and load using a dBA meter and point it at the computer at a distance of ~50 CM. It's always difficult to measure noise levels because there are always noises in the background which can affect the results so it may not be 100% precise but it should give you a clear indication of the noise levels for the cooler.

Overall, the Wraith Max and Wraith Spire are perfect for someone who does not plan on overclocking. Both coolers are more than capable of providing excellent cooling capabilities. The Wraith Max is a well designed stock cooler that competes well with low-end third party coolers. It is easily the best stock cooler on the market and it has no problems competing with after market coolers such as the CM 212 EVO. I am also very impressed with the Wraith Spire considering that it is way better than any Intel stock cooler. AMD certainly deserves a round of applause for bundling their Ryzen processors with fantastic stock coolers.